When Coach Dick “Sparky” Adams talks, people listen. I know I have for over 45 years.

Coach Adams has always had a commanding presence when he speaks, presenting himself as someone you can trust and respect. He’s a true leader.

Even at 90 years old, Coach Adams has the ability to draw you in with his deliberate but clear story-telling prowess, his no-beating-around-the-bush straight talk, and his infectious laugh.

During a recent visit with Coach Adams at the Sandra Lane Senior Apartments in North Tonawanda, the stories were flowing smoothly like water down a stream. His memory is still sharp as tack and his football knowledge unparalleled. And despite constant pain from Rheumatoid Arthritis and several back surgeries, Coach Adams still has that “spark” in his eyes and passion in his heart.

“Always nice to see and chat with you former Bulldogs,” Coach Adams expressed to me, Jeff Martin (Class of ’77) and Jim Dunnigan (Class of ’69).

We talked about a lot of things — family, life and the Bills-Chiefs playoff game. Coach imparted his thoughts and wisdom on missed opportunities by the Bills from a coaching (strategic) and player (execution) perspective. His analysis was spot on, but of course it was!

But the majority of the conversation was about Kenmore East football — one of Coach Adams’ favorite topics, along with the love for his late wife of 64 years, Jean; their three children, Rick, Penny and Amy; and grandchildren, Alex, Shelby and Rachel.

He remembers so many funny stories about players and the details of games over the years. It was an honor and pleasure to sit back and listen for a couple hours.

Coach Adams will proudly tell you he bleeds Blue and Gold. A physical education teacher at Kenmore East from 1959 to 1978, Coach Adams earned the recognition and admiration of the Bulldog community during his successful stint as the varsity head football coach from 1964 to 1977. His overall record was 81-26-5, leading his team to undefeated seasons in 1970 and 1972.

With an innate ability to teach and motivate his players, Coach Adams left an indelible mark in the lives of everyone he touched. Coach taught character and leadership along with proper fundamentals.

“My focus was to treat all players equal, teach the techniques needed and have fun,” Coach Adams said proudly. “I tried to instill discipline.”

Every magnificent mentor carries the DNA of devotion. Coach Adams’ devotion for and loyalty to the student-athletes he worked with has been reciprocated back to him over the years. His impact is felt by many of us who were fortunate to play for him, coach with him and can now call him a friend.

“Over the last six decades, I’ve had a unique relationship with Coach as a player, a member of his coaching staff, and as an administrator at Kenmore East,” Dunnigan said. “During that time his support for me in whatever I was doing was unwavering. He has offered advice, support and well wishes in each of my endeavors. A truly exceptional characteristic is his loyalty to each and every individual who played for him, who supported the team through cheerleading, the band, the Blue Gold Diggers, and anyone else who contributed to the Bulldog football program. His impact on those with whom he was associated is eternal and life changing.”

“For me, Coach Adams has been the most influential coach and mentor in my life,” said Steve Trusso, Class of 1971, and considered the best quarterback in the history of Kenmore East football. “I owe everything to him for the success I and my Bulldog teammates enjoyed in our Kenmore East football years. Not to mention his influence on promoting me to various universities which allowed me to receive an athletic scholarship at the University of Wyoming. Whenever I see Coach Adams, I’m still amazed how enthusiastic and knowledgeable he is in every aspect of football. His friendship will always be cherished!”

“As a player for the Bulldogs, I had the utmost respect for Coach Adams,” Martin said. “I went into games so confident because of Coach Adams! As a co-coach with Sparky, it was a daily clinic of football knowledge. He knows more about the game than anyone I know. Now as a friend, I respect coach more than ever. To visit with him on occasion, I can’t believe all the players that played for him! He always has something nice to say about his former players. Sparky is a class act!”

The respect, love and adulation for a coach are like none other, and I have felt it and seen it on a number of occasions over the years with Coach Adams. In several football reunion gatherings, it was never a group of grown men in their 50s, 60s and 70s talking with just any football coach. In my mind’s eye, I saw a bunch of 17-year-olds showing love and respect for their former coach.

Coach Adams stood for a lot of things while coaching at Kenmore East. He taught boys to be men. He taught discipline. He taught what it was like to triumph over fear. He taught the meaning of respect. He taught life.

“It makes me proud to see all of my former players go on to be successful in their careers,” Coach Adams said.

Coach Adams will always be an influential person in my life. He’s a man whom I hold in high regard because he tells it like it is. When he speaks, I listen.

“Denny, this has been so nice to see you gentlemen,” he stated as we said our goodbyes. “It’s always a pleasure.”

The pleasure is all ours, Coach! 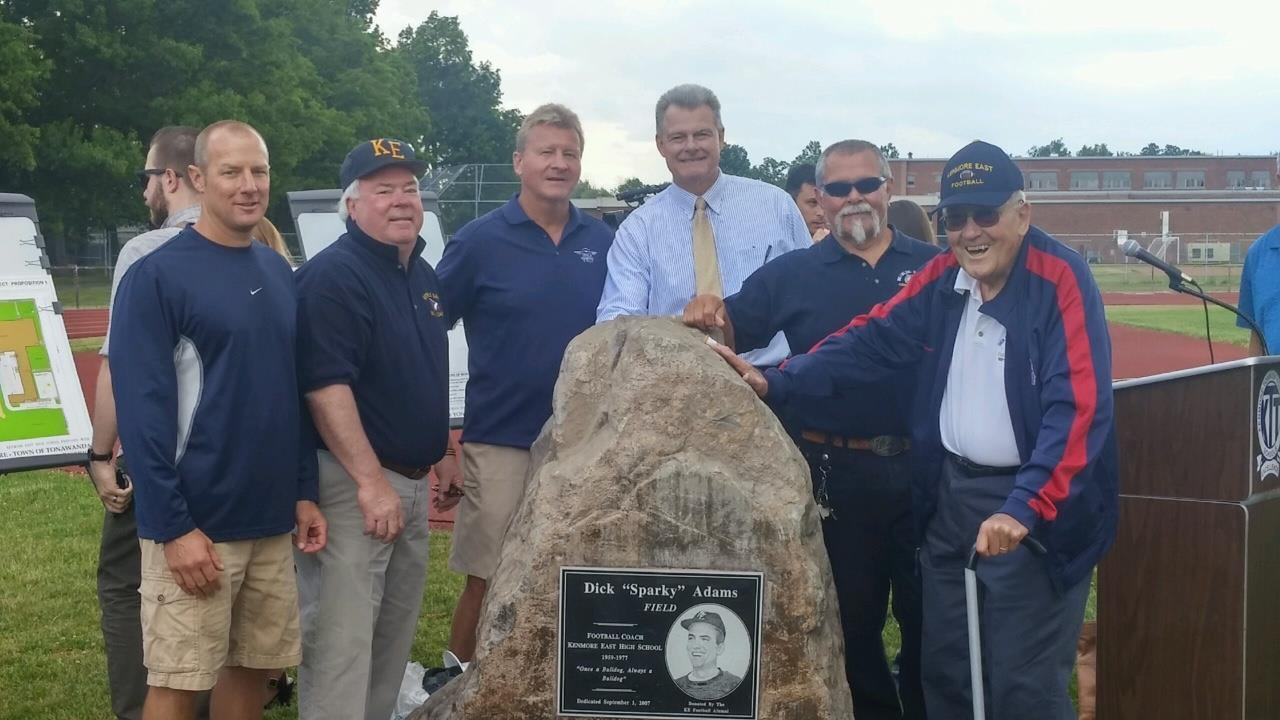